Yehuda dreamed about beautiful cars in his youth. The family worked hard but owning a car was not self-evident. However, Yehuda did not give up on his dreams. At the age of nine he built a convertible of matches. This would one day be his dream car!

Yehuda’s love for Peugeot goes back to 1976. At the age of 22, he bought his first car: a Fiat 124 coupe. A nice car but it was more stationary than it was driving. Therefore, after a few months, he decided to buy a Peugeot 404 sedan from 1966. That turned out to be a smart move because he became completely attached to the brand.

In the same year, he drove more than 11,000 kilometers to Europe and back with the Peugeot 404. His wife joined him in Rome and they drove back through Amsterdam. It has been a memorable ride for Yehuda and his wife. The 404 did not cause any problems the entire trip.

More Peugeot followed: another 404, then a 504 and a 505. His business in audio equipment grew and so he was able to buy his first new Peugeot in 1982. It was a 305 and a 309 followed a few years later. In 1989 he was the first and proud owner of a 405 SR in Israel. In that period he was looking forward to a beautiful classic Peugeot and preferably a convertible. And he got that chance in 1991.

A black 404 convertible was for sale in the North of Israel. This was the car of his dreams! He went to take a look and took his eleven-year-old daughter on a trip to the black 404 convertible. It was a restoration object that needed a lot of work. Once he got to the car, his daughter asked why he wanted this car so badly. “Because I used to dream of this,” Yehuda told his daughter. “If this is your dream then you should definitely buy it,” she replied. And so it happened.

The 504 convertible is one of the first type. Especially recognizable by the double headlights and the characteristic angled rear lights. While the tightly polished red convertible gleams proudly in the desert sun, Yehuda says that he bought it in 2003 together with his seven-year-old son. They had planned together to buy a 504 convertible in France. That was during a Bat Mitzwa family trip of his twelve year old daughter in France. The first 504 convertible was found in Paris, but that was not a success. The second address near Marseille was a long drive, but the car looked good. We arrived late in the evening after a long car trip. Enthusiastic as I was, I immediately wanted to buy the car. That was the case with cash, so with all credit cards in your pocket, you had to search for an ATM overnight. My wife didn’t like it all at the time. Still I persevered.

The car became our property that night. While I was chasing my family towards the harbor, the car started to falter. Overheated! Quickly took some water from a river that flowed along the highway. We picked up the hotel while driving and the next day we found a company that could transport the 504 to Israel by ship. The 404 convertible had a buddy in the garage.

For example, Yehuda and the Peugeot brand have become lifelong friends in recent years. 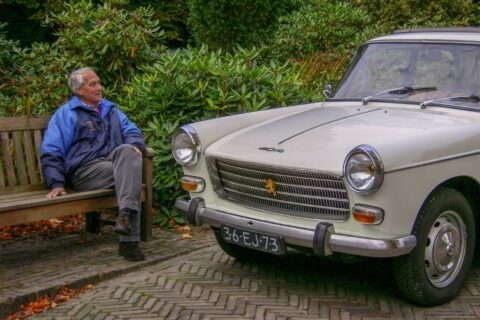 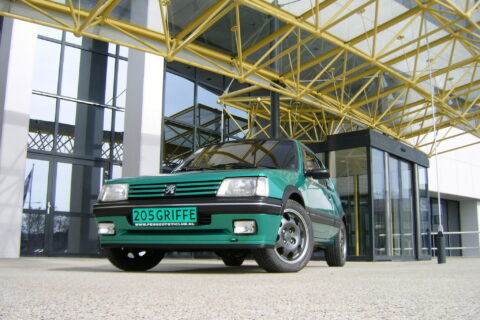 The Griffe is a Masterpiece