Bzzzonder free in a J7

Globetrotters, hippies, nomads… are on the move, always in motion. Michel and Mirande from Ommen like to travel with their 3.5 tonne J7 through Southern Europe. This is also the case in the summer of 2019. No summer vacation, but they traveled with and lived in their J7 for almost six months. For Michel and Mirande it is the first “Grand Tour”, the J7 has already led them 350,000 km, including two rounds of Europe. During their long journey through the sunny south, they often settle in unexpectedly beautiful locations and with their modest J7 hardly stand out. The relatively narrow camper works its way through the narrowest streets without any problems. Comfortably behind the imposing windscreen, Europe passes them by and they take life as it comes. Pure freedom.

Freedom is what they have consciously chosen. The J7 was ultimately the reason for Michel and Mirande to leave their home town of Ommen and choose a nomadic life in the direction of Southern Europe. It was now or never, or you won’t get away. So sold house, furnished camper and go! Mirande’s work as a freelance content and social media manager just continued and with a little poke and reach, the chimney (or rather, the exhaust) can continue to smoke. How Simple Can Life Be?

Well, sometimes it is not easy. 4G internet is fast but a 1978 J7 is not. The pace of the J7 is “doucement” and it is almost therapeutic. The fixed parts stock include filters, V-belts, water pump, cooling hose, disc brake and liters of oil and coolant. Experience shows that a roll of duct tape and a van of WD40 also belong to this equipment. The rims and tires have been made in a common size because the original size is really scarce. Along the way you regularly encounter mechanical and technical challenges. Fortunately, there are plenty of handy garage owners in Southern Europe who, for example, see a faulty water pump as a real challenge and get them ‘en route’ again.

The wind direction determines their course. Inside the camper it is cozy. The interior is self-designed, complete with USB connections and solar panels on the roof. The interior is decorated with Vintage wallpaper that matches the age of the car well. The two dogs Frans and Freek soon found their residence under the bed. The dog’s existence is “comme une rêve”. No poop bags, never on a leash, sleeping in every day and a permanent place in the cockpit on travel days.

On the side of the azure blue bus is the name Bzzzonderbus. A relic of the J7’s past life. And yes, it is special, so the name has remained. The name even became a project. The adventures they experienced along the way were shared via social media and hordes of followers experienced it. If you want to read the adventures again on Instagram: @bzzzonderbus_on_tour or on Fabebook: Bzzzonderbus

Is it already starting to itch to go out with a J7? Beautiful! The tip that Michel and Mirande have for you is: just go! Don’t take too much, choose a route via small roads, always connect with locals, they are your best guide and let the world pass you by at the pace of a J7. Bon voyage! 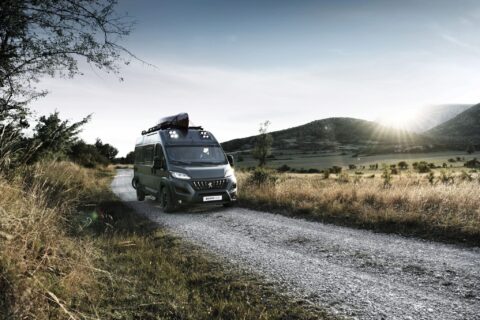