Life is a journey of discovery and preferably in a Peugeot

Jan van der Meulen from Oudehaske had a passion for technology and got the most out of life. He looked wide-eyed at the world and saw it as his playground. He was able to wonder and so he regularly got involved in something. He liked to share his passion for classic French cars with everyone who was open to it. It was not his mission but his passion to share knowledge and adventures. Jan is no longer with us, but the stories and memories of him are still very much alive.

“What do we do with all those parts now?” says Ulbe, Jan’s son-in-law. “I wanted to ask him so much more. The shed is full of parts that Jan knew exactly what they were. He knew every place in the shed like the back of his hand. He knew exactly where everything was. Family and friends knew all too well that you had to stop by Jan if you needed something for your oldtimer, before you went to look elsewhere. Behind every part there is a story and Jan knew it. In fact, he told you right away. With an hour you didn’t have enough with him and he could fill a day with you too, if you wanted to. With his passion for old-timers, he ignited me well. Fortunately, because I wouldn’t want to miss all those old-time adventures.”

The series of vintage cars that has been in the shed is almost endless. A Peugeot 201, a Peugeot 190 S Cabriolet and a Matthis are still left over from the extensive collection of classic cars of the Van der Meulen family. Bettie, Jan’s wife, can still remember almost all of them. “We have been on the road a lot with those old Peugeots. The Elfsteden Oldtimer Tour was a regular annual event. Together with our two daughters Janneke and Elsbeth we have traveled many kilometers. Of course driving in the car, but also hours next to the car. You couldn’t do Jan greater pleasure than with a car that gave up on the way. An open hood always attracted people. While he got the car back up and running, he also managed to keep the conversation going with the interested bystanders.”

“We once went to France with friends to see a garage find. There would be a nice 203 waiting for us to go on sale. It turned out to be a special collector. The best man had bought a monastery. Not to live in, but to accommodate his restoration projects. In France, such a thing is possible. That evening we sat around the campfire. In one of the sheds, Jan found an ancient radio that no longer worked. Out of interest, he took the radio with him and soldered the old radio with a glowing spoke and some tricks. After an hour, music came out again. The next morning the old owner saw that his radio was working again and had tears in his eyes. He had special memories of it. The friendship between the two was quickly closed. I like to remember that spontaneous fun with Jan.”

Daughter Janneke adds: “My father was inquisitive. He wanted to know what was going on on a technical level. He has driven many weddings with the Peugeot 201. Sometimes the car came to a stop and not bothered by any stress my father got out to blow into the engine or give it a blow in the right place. Then they could continue. There were couples who thought it was part of ‘the show’, but in reality Jan was very serious about getting his guests to the altar in time.”

“I don’t know any better than my father tinkering with vintage cars. On holiday, this sometimes caused a bit of tension, because the radar for old-timers and parts was always on. Before we knew it, we heard ‘Let’s have a look’ and then he was on to something old again. A Renault in France, a Morris Minor in Denmark, and so on. And he was patient. The fabric to cover his Matthis became a search of more than 6 years to restore it completely in the Jugendstil style.”

Jan thoroughly enjoyed his passion for technology. There are so many stories to tell about what he and his relative went through. Still, it couldn’t go on forever. There came a time when Jans’ health failed him. That’s when you need to pass on the tangibles of your hobby. Literally. Sell, clean up and share. He almost completed it. He had to leave the last bit to his family. And they do that with love. One car remains in the family and the rest is given a new destination. Jan has left quite a few Véhicules et pièces de collection behind and will also be found in the columns of this column. But it’s the warm memories that stay and that’s what matters. Moreover, a hobby has a beginning, but also an end. So pass it on on time. ‘Betink dast stjerlik bist’ is the sober advice of this passionate Frisian.

Without passion life is pretty boring 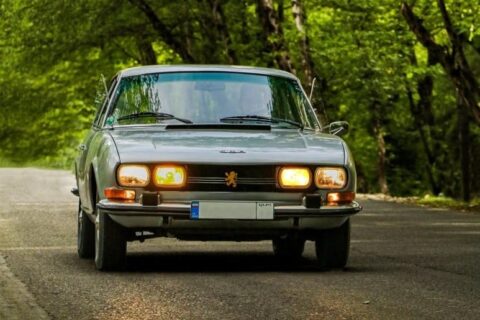 A rare sight in Iran